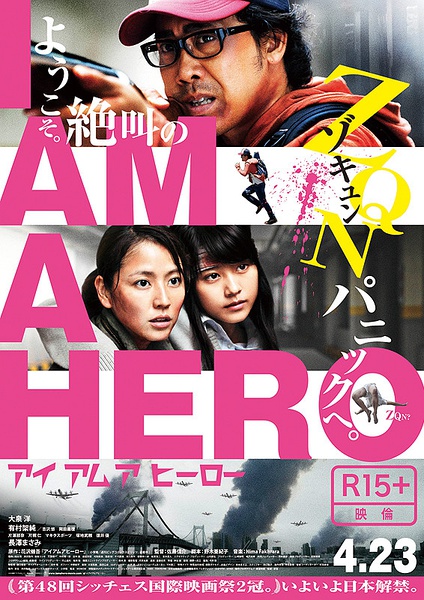 Hideo Suzuki (Yo Oizumi) is ironically named. His name means “hero” in kanji. He’s anything but that. He works as a mangaka, creating manga for his boss. He dreams of being the idealistic hero but he’s more often than not, the one who fails. He tells his girlfriend he will try harder next time. She doesn’t want to hear it. She just wants him to sell his skeet rifle, the one object he treasures, along with his official permit.

Director Shinsuke Sato directs the live adaptation of I am Hero, based on the manga by Kengo Hanazawa. The result is a gory horror comedy where our would-be-hero wants nothing to do with his role. Strangely enough, he’s got one very desirable shotgun on him in a country with gun laws so strict, he’s the only with a firearm. That makes him a target for the living as well.

So when shit hits the fan, we learn what variety of zombies we’re dealing with. The scary, spasmodic, walk on all fours kind, with dead eyes and droopy heads. Worst of all, these zombies repeat the actions and the phrases of the things that defined them in life. Hideo is running to find a safe haven, and he’s not alone. Hirumi (Kazumi Arimura), a young schoolgirl, ends up following him. However, she’s been bitten by a baby. That causes a rather singular infection, where she’s still able to recognize him somewhat.

Salvation seems to be altitude, so Hideo and a rather out-of-it Hirumi head to Mt. Fuji. They’ll soon run into a survivors group. Hideo must hide Hirumi’s infection while all eyes covet his rifle. With provisions running scarce and a revolt forming within the ranks, Hideo is going to be outnumbered by threats both alive and dead. His only ally is Tsugumi Oda (Masami Nagasawa), a nurse that believes in him.

Recommended for fans of the zombie genre. It’s both serious horror and comedy flick at the same time. Filled with gory special effects and the scariest zombies you’ll see, it rivals a lot of current entries in the genre. How this film didn’t end up as part of Fantasia, I’m not sure (Update: After this review, it became part of the Fantasia 2018 lineup!). It’s definitely worth a watch.