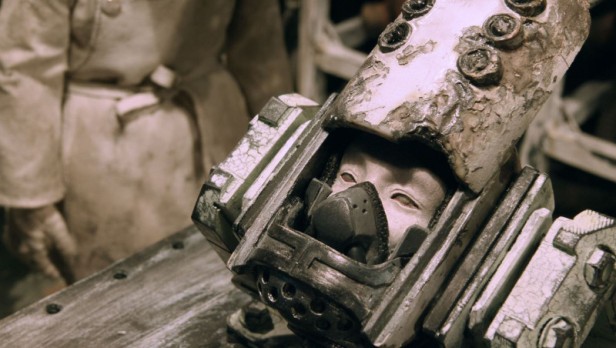 Animation is a bit of a double edged sword. Sometimes you will find the most lavish, outlandish and amazing animation in a film but the story has been told a million times and the characters have no depth. Now forget all that, because this is movie with an actual engaging story, a well defined character and yes, all the visuals to boot.

The inventive mind of Japanese director and writer Takahide Hori has created a world of both aberration and raw charm with Junk Head. It’s a world of terrifying creatures and subterranean denizens. It feels like someone found a box of those old time toys that were full of sharp edges that would cut into your fingers when you tried to touch them. That is how this movie plays and feels. Raw, unedited and dirty.

In case I didn’t say it clearly, that’s what makes this movie stand out and shine like a tin can in a garbage bin. It feels grungy, it feels punk, it feels like it would stab you and yet you want to hug it. Each new construct is a character with personality, nuance and agency. There are more than a few surprises along the way.

Recommended for all lovers of stop motion animation. Yes, the visuals are marvelous and the work seems endless. But the story and the character building result in a film that is more than a lot of pieces put together. You will end up caring about these characters, you will want to see them triumph and you will dread to see them fall. As animation movies go, this one is very well put together.